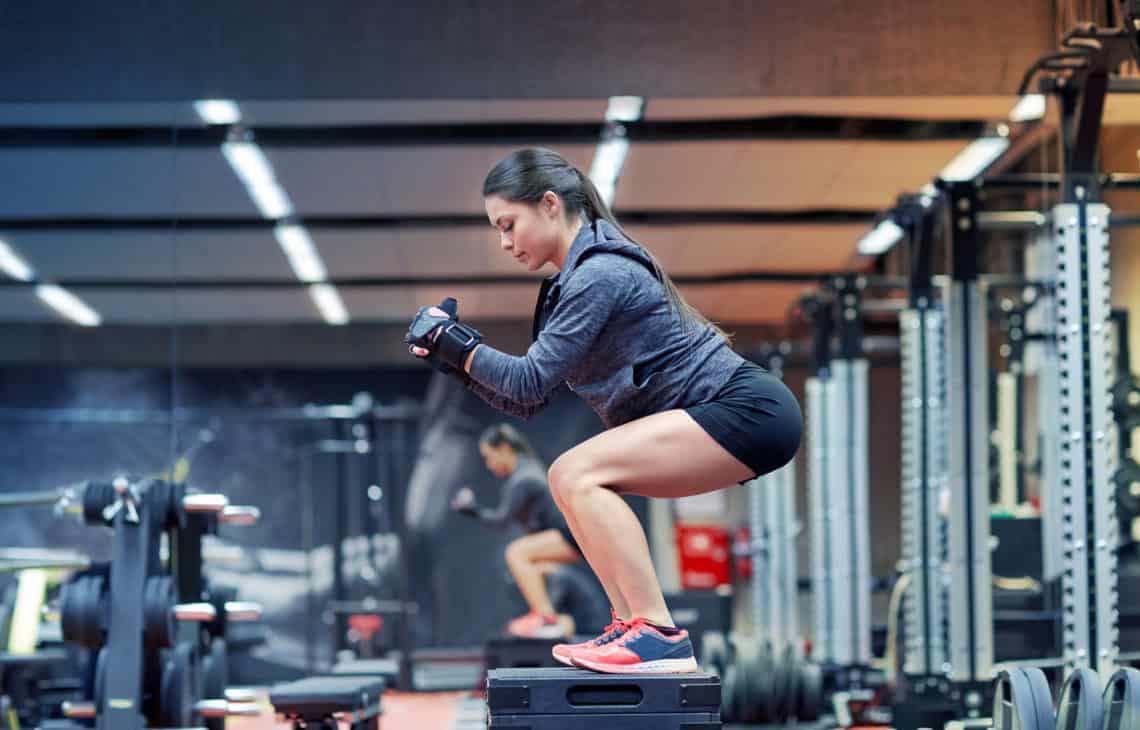 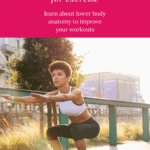 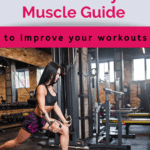 How well do you know your lower body muscle anatomy for exercise?

Have you ever been in an exercise class and had the instructor say to feel it in your quads or engage your core and really stopped to think about it?

Have you ever been silently confused, but smiled and nodded anyway? Chances are you’ve heard some names in passing, but are you confident you know their functions?

Understanding the anatomy of your muscles and how they work is a crucial part of understanding how your body works during exercise.

I hear frequent questions about muscles. When it comes to the body, there’s a lot of confusion.

Today we’re going to do a who’s who and what they do for major lower body muscle groups. And how all those muscles work together.

Disclaimer: Always seek proper instruction before initiating an exercise program. Not everything is great for everyone! Consult with your qualified health care practitioners for an exercise program tailored to your needs. Stay healthy and injury-free! Read the full disclaimer.

Gastrocnemius (aka gastroc for short) and soleus. Technically there’s another smaller muscle in there too called plantaris, but the major players are gastroc and soleus. The gastroc is the more visible of the two, making up that rounded look when you rise up on your toes.

The back of the lower leg. The gastroc muscle crosses the knee joint, which is essential to note for optimal stretching and strengthening positions. Beneath the gastroc is the soleus. Together these muscles fuse into thick fascia that becomes the Achilles tendon, ultimately attaching at the back of the heel.

Function of the Calf Muscles

To plantar flex (point) the foot and rise up on your toes. The gastroc assists with running and jumping as well as pushing off when you’re walking. These muscles also help with the first line of defense in keeping your balance during small postural sways.

By pressing your heels down during a downward dog, you target the calf. Stretching the heel off the back of a step or standing on a wedge board are other positions that lengthen these muscles through their full range of motion.

The quadriceps group is made up of four muscles. These are rectus femoris, vastus lateralis, vastus medialis, and vastus intermedius.

The quads are found on the front aspect of the thigh between the hip and knee, attaching below the patella (knee cap) on the lower leg.

Rectus femoris is the only quad muscle that crosses the hip joint and attaches to the pelvis. The patella is embedded within the quad tendon, acting as a fulcrum to provide the quads with more leverage to produce strength.

Function of the Quads

This large muscle group performs many functions. If you’re sitting, it’s responsible for extending the knee. During more dynamic movement, the quads help perform squatting activities including getting up and down from a chair. Because the rectus femoris crosses the hip joint, it has a small role in flexion of the hip.

The standard quad stretch involves bringing the heel toward the gluts with either a hand or strap, making sure to keep the knees in line and pelvis neutral. A common mistake is allowing the knee to drift out to the side. So check your form!

Examples of exercises recruiting the quads include squats, lunges, and step ups. Again, these are just some basic examples, there are many options.

Get a crash course in major muscle groups including exercises and stretches that go with each!

(AND finally, stop feeling like you don’t know what you’re doing)

Be sure to check your spam and promotions tab – you’ll be taking the guesswork out of your fitness in no time!

The hamstrings are made up of 3 muscles; biceps femoris, semimembranosus, and semitendinosus.

The back of the thigh from the sits bones to the top of the lower leg, crossing the knee joint. From behind, biceps femoris is on the lateral (outer) side, and the semimembranosus/semitendinosus are on the medial side (inside).

The main functions of the hamstrings are to flex (bend) the knee and extend the hip. They also stabilize the knee during standing activities. When walking, the hamstrings control the extension of the knee eccentrically.

Downward dog and pyramid pose are yoga pose examples that stretch the hamstrings. More traditional stretches include seated forward reach maintaining a neutral spine and hamstring stretching with a strap.

At the crossroads of the lower extremity and the spine, the hip provides a central point of both mobility and stability.

Because of this, many muscles perform multiple functions depending on where a limb is in space. So while they may perform one main function, they can assist with other motions or with stability during that motion.

So a busy multi-muscle intersection, what could go wrong! I’m going to try to keep this as simple as possible.

The gluts are made of several muscles. They’re known officially as gluteus maximus (glut max), gluteus medius (glut med), and gluteus minimus (glut min). As advertised, their Latin language-based titles suggest the size of each muscle.

For lack of a better word, this is your butt. Glut max makes up the rounded backside look, glut med and min are situated somewhat underneath glut max.

Function of the Glutes

Glute max is one of the largest and most powerful muscles in the body. The primary function acting on the lower body is to extend and externally rotate the hip. The lateral side of the muscle inserts with the IT band, contributing to lateral stability at the hip and knee.

Another essential function is to support the lumbar spine. Glut weakness is a common finding in chronic low back pain.

Everyday activities requiring glut strength include getting in and out of a chair and climbing stairs. If the glutes are weak, the body will overwork other muscles in that area to accomplish the task. Hello, low back pain.

The figure 4 and pigeon stretch are examples of glut stretches.

You’re probably starting to notice some of these exercises target multiple areas and can give you a lot of bang for your buck. Squats, lunges, step-ups, quadruped leg lifts, and fire hydrants target the gluts.

This group is made up of several muscles including glut med, glut min, and tensor fascia latae (TFL) which attaches into the IT band.

Surrounding the lateral (side) of the hip.

Function of the Hip Abductors

This group of muscles helps keep the pelvis level during standing activities as well as move the leg laterally (out to the side).

There are several muscles involved in abduction, glut med is the strongest of the abductors. Weakness in the hip abductors can contribute to other issues further down the leg. They help with overall stability.

Due to anatomy, some muscles are difficult to isolate.

To stretch the muscles that abduct the hip, there is often a rotational component such as the figure 4 stretch.

Supine twist, standing side bend stretch, and quadruped side bending stretch are other examples.

Psoas major, iliacus, rectus femoris, sartorius, pectineus. The psoas major, often referred to as just the psoas (pronounced: SO-as), has made its way to the mainstream.

Function of the Hip Flexors

The function of the hip flexor group is just like it sounds, to flex the hip and draw the knee closer to the chest.

They also help with putting one foot in front of the other while walking.

But the psoas does so much more than that.

Because of its anatomy and deep connection to the lumbar spine, psoas is like the unsung hero of core stability.

Sedentary jobs are commonplace nowadays, and prolonged sitting can cause the psoas to become “tight”, tugging on the lumbar spine and tilting the pelvis forward. The confusing part is that it doesn’t necessarily mean it needs to be stretched!

In short, a “tight” muscle can also be a weak or overworked muscle, setting off a complex imbalance leading to all sorts of assorted back pain, hip pain, and more.

Best to visit a skilled physical therapist and get evaluated to determine what your psoas and company need.

Kneeling hip flexor stretch (with a neutral spine), the back leg of a pigeon stretch, supine with one knee pulled in toward the chest (the opposite leg is getting the stretch).

Marching with a resistance band around the knees, mountain climbers, straight leg raise. All while maintaining a stable core, of course.

There are many small muscles involved in external hip rotation. For general exercise information purposes, it’s not necessary to know them individually, just what they do as a group.

Piriformis is one of them which has become more common to hear about in recent years.

In case you really wanted to know, the following muscles can perform external rotation:

They work together, so it’s impossible to say I think I’ll work my inferior gemellus today.

Deep in the backside of the hip underneath the gluts between the sacrum and the back of the femur (thigh bone).

This group of muscles function to rotate the hip externally, which is the motion you perform when you cross one ankle over the opposite knee. During standing activities, they provide valuable stability to the hip joint.

Clam shells and fire hydrants get to the point pretty quickly.

There are also muscles that assist the hip with internal rotation, which function to rotate the hip in the opposite direction. This muscle group is not often mentioned in fitness; however, they do contribute to the overall stability of the hip.

These muscles include the TFL (tensor fascia latae), portions of glut med and glut min, adductor longus, brevis, and magnus, as well as pectineus. These muscles all perform other functions, but due to their anatomy, assist with internal rotation.

Made famous by the thigh master, these muscles make up what we think of as the inner thighs and groin muscles.

The adductors function to move the leg toward the midline of the body and play a critical role in the stability of the hip joint.

Luckily, we now know you can’t thigh master your way to slim legs.

Bridging with a ball squeezed between the knees, sidelying adduction leg raise.

Squats also work the adductors quite a bit.

I hope you have a whole new appreciation for how much hard work your body does behind the scenes.

Understanding how our bodies work to produce movements can help you get more out of your workouts and potentially avoid injury.

Did you grab the free Fitness Anatomy Guide? It summarizes this post plus core and upper body!

Get a crash course in major muscle groups including exercises and stretches that go with each!

(AND finally, stop feeling like you don’t know what you’re doing)

Be sure to check your spam and promotions tab – you’ll be taking the guesswork out of your fitness in no time! 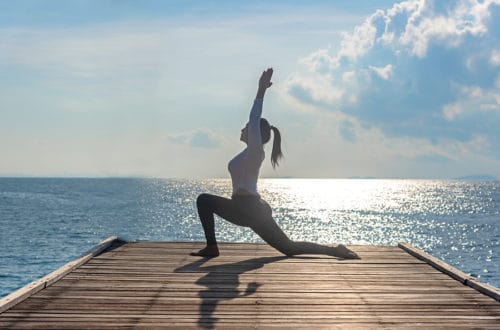 7 Tips for Staying Consistent with Exercise 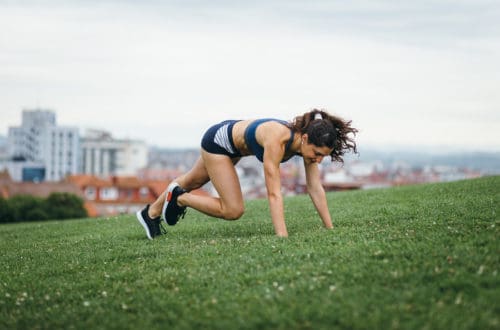 Tabata vs. HIIT vs. Interval Training – What’s the Difference? 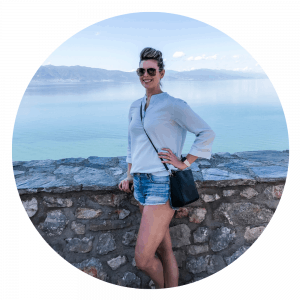 Welcome! I'm Maura, the physical therapist and fitness instructor behind Empower Your Wellness. I'm bridging the gap between rehab and fitness to help you avoid injuries while staying active.

be sure to check your spam & promotions tab - drag my email to your main inbox and let your email provider know how important injury prevention is!

We use cookies to ensure that we give you the best experience on our website. If you continue to use this site we will assume that you are happy with it.OkNoPrivacy policy